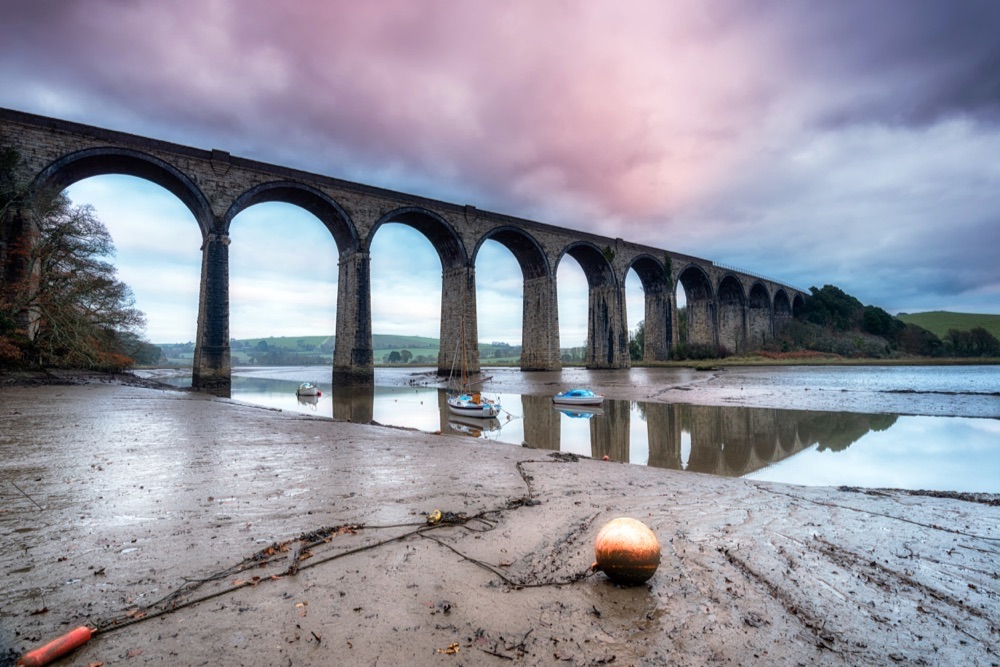 Editor’s note: In July, we announced the ability to locally debug and develop any Lambda function, in any language or framework, against live cloud resources with any IDE, for free. You don’t even need a Stackery account! Take a look at this post from Sam to learn more about this exciting feature of Stackery.

One of the biggest challenges when adopting serverless today is mastering the developer workflow. “How do I develop locally?”, “How should I test?”, “Should I mock AWS services?”. These are common serverless questions, and the answers out there have been unsatisfying. Until now.

There are a few reasons that developer workflow is a common pain point and source of failure for serverless developers:

“Getting a smooth developer workflow is a challenge with serverless.” Says iRobot’s Richard Boyd, who also appeared as a guest on a recent episode of Stackery’s weekly livestream. “There are some people who think we should mock the entire cloud on our local machine and others who want to develop in the real production environment. Finding the right balance between these two is a very hard problem that I’m not smart enough to solve.”

Developers spend the bulk of their coding time following a workflow that looks something like this: 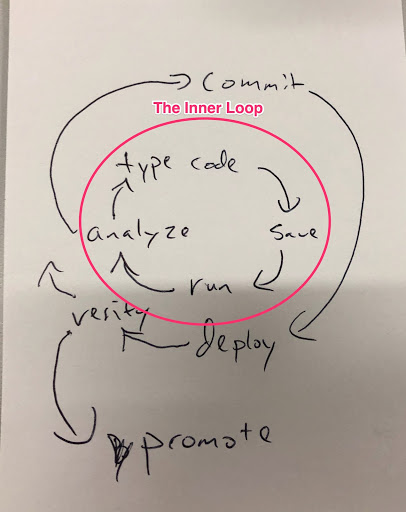 In a traditional local development environment, this loop can be completed in 3-10 seconds, meaning a developer can make and test many code changes in a minute. Today many serverless developers are forced into a slow inner loop which takes several minutes to complete. When this happens developers spend most of their time waiting for new versions of their code to deploy to the cloud where it can be run and analyzed (before making the next change). This cuts down on the number of code changes a developer can make in a day and results in context switching and frustration.

The outer loop changes in service configurations and application architectures occur less rapidly— maybe a few times a day for apps under active development. This is an area where Stackery has a long history in helping developers express, deploy, and manage the pipeline of promoting applications to production.

Serverless architecture is still relatively new so best practices are evolving and not widely known. However, there are a few common approaches to the serverless developer workflow which we know results in suboptimal developer workflows and productivity.

Suboptimal Approach #1: Push each change to the cloud

One common approach is to avoid developing locally and deploy each change to the cloud to run in the cloudside environment. The primary disadvantage of this is that developers must wait for the deploy process to complete for each minor code change. In some cases, these minor code change deploy times can be made faster, but only to a point and often at the cost of consistency. For example, Serverless Framework’s sls deploy -f quickly packages and deploys an individual function.

While this does improve the inner loop cycle time it is still significantly slower than executing in a local environment and creates inconsistency in the cloudside environment. This makes it more likely problems will emerge in upstream environments.

Another common approach is to create mock versions of the cloud services to be used in the local environment. Many developers figure out ways to mock AWS service calls to speed up their dev cycles and there are even projects such as localstack which attempt to provide a fully functional local AWS cloud environment. While this approach may initially appear attractive it comes with a number of significant downsides. Most significantly, fully replicating AWS’ rapidly evolving suite of cloud services is a monumental task.

Inevitably there will be inconsistencies between the local mocks and real cloudside services, especially for recently added features. With this approach, the local environment is not consistent with the cloudside environment, and somewhat cruelly, any bugs resulting from these inconsistencies will still need to be debugged and resolved cloudside which means more time spent following Suboptimal Approach #1.

There is a best practice today for creating a serverless dev environment. The benefits of this approach are:

Following this approach, you will execute local versions of your function code in the context of a deployed cloudside environment. A key component of this approach is to query the environment and IAM configuration directly from your cloudside development environment. This avoids the need for keeping a local copy of environment variables and other forms of bookkeeping needed to integrate with cloudside services.

The result? Consistency between how you code behaves locally and the cloudside environment. For example, one common debugging headache results from different service to service permissions and configurations between local and cloudside resources. This setup cuts off that entire class of problems. The bottom line? Fast local development cycles, reduced debugging friction, and the ability to ship new functionality faster as a result.

There are a few steps required to achieve this setup:

This approach sets you up to rapidly iterate on code locally, deploying to your dev environment only when they need to make environment configuration changes or they have made significant progress on function code. Once the code is ready to PR from the development environment it can be deployed to other environments (test, staging, prod) via CI/CD automation or manually triggered commands.

We’ve been iterating on serverless code for a few years now at Stackery, sharpening the saw, and honing in on a prescriptive workflow to optimize our development workflow. Several of us nosed our way into the cloudlocal approach. As we shared our experience with other pioneering serverless engineers we found a growing consensus that this was the “right way to serverless” and the productivity and flexibility it unlocked was game-changing.

Today we’re announcing the release of the stackery local invoke which unlocks this more efficient and logical workflow for serverless projects using AWS Lambda. If you’ve spent any time in serverless development, you know how overdue and crucial this is.

Catch a sneak peek below and sign up for a free Stackery account if you haven’t already. Be sure to check out our doc on Cloudlocal Development, too! 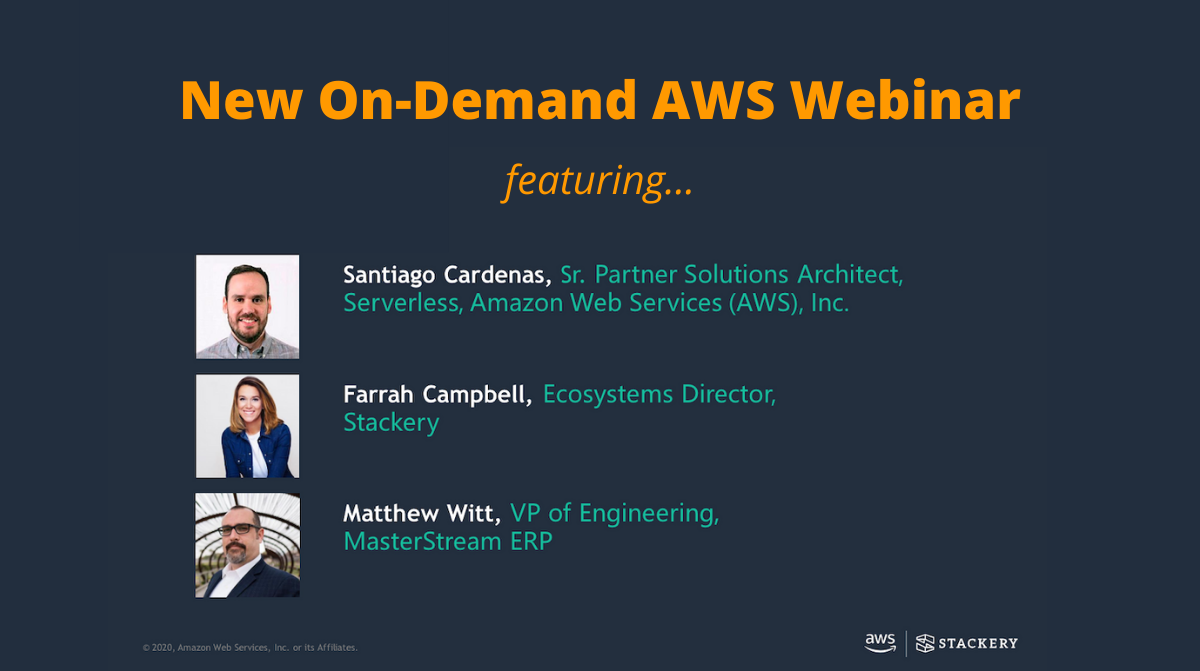 A few weeks ago, Stackery had the pleasure of participating in a webinar with leaders from AWS and MasterStream ERP, a telecom-quoting company that has quite the archi... 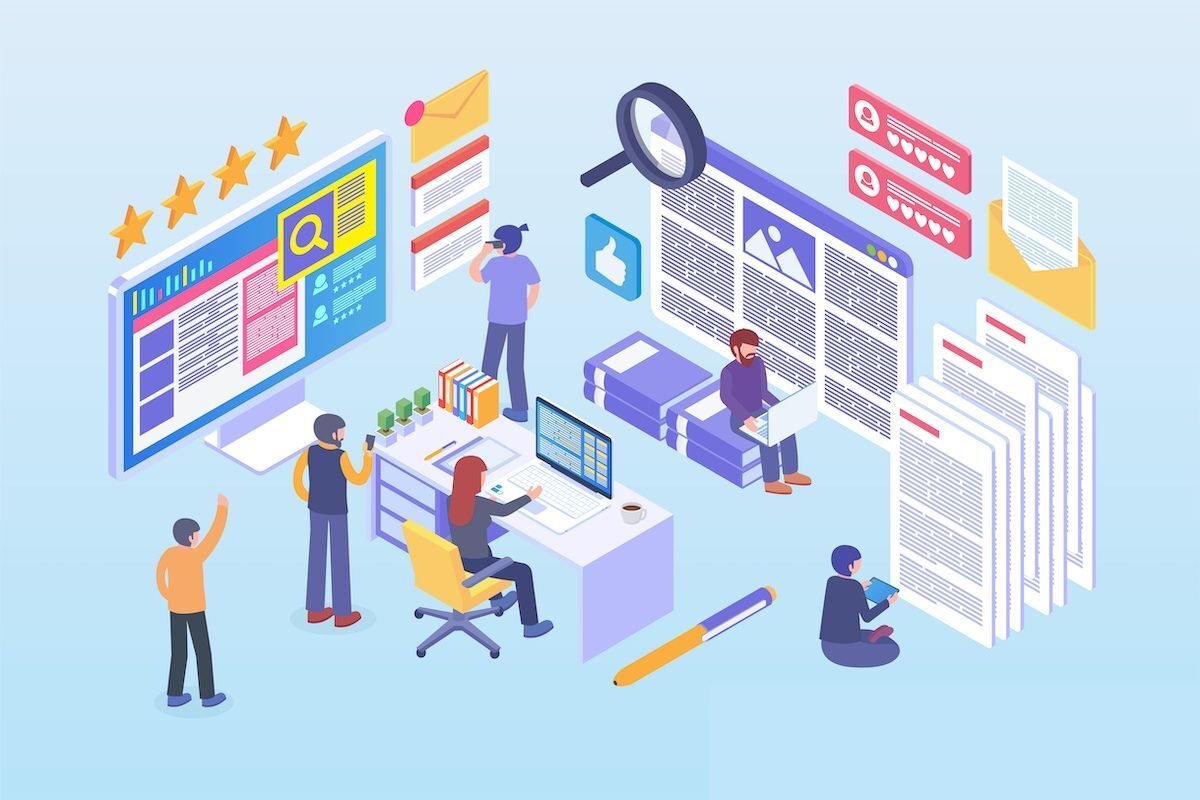 A note from Gracie: This post has been updated to give due recognition to a certain serverless champion who was helpful in creating this list and is well-worth a follo...